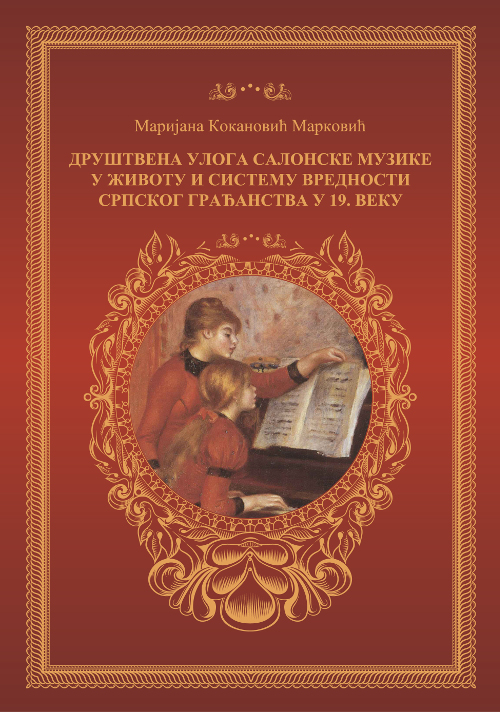 30 Jun Marijana Marković Kokanović, external associate of the scientific project of the institute, published a study The Social Role of the Salon Music in the Life and the Value system of the Serbian Citizens in the 19th century (in Serbian).

Posted at 09:57h in Uncategorized by Admin

The subject of the research monograph: The Social Role of the Salon Music in the Life and the Value System of the Serbian Citizens in the 19th century refers to the salon music culture on the territory of the Serbian countries (the Principality, the Kingdom of Serbia as well as the Serbs on the territory of the Habsburg Monarchy) in the 19th century, more precisely, until the outbreak of the First World War. The chronological frame offered (up to 1914.) matches the standard periodization of the European history (the Long 19th century) and it coincides with the political, social and cultural events of the time. In that period, during the creation of modern civil state, a specific domain of private life, as well as a value system, mostly taken from Central Europe, was constituted. The book contains 5 chapters: The introductory chapter, Music Publishing and Salon Music Production, Salon Music in the Life of the Serbian Citizens, Functions of the Salon Music, The End of the Era of the Salon Music. In this monograph, salon music was seen as a specific product, medium of a lifestyle and mentality of one particular era. In order to get answers to the questions on place and function of the salon music in a life and value system of one society or social group, it was necessary to step out of the traditional musicology into the field of interdisciplinary research that includes sociology, history of culture, everyday life, and social history.