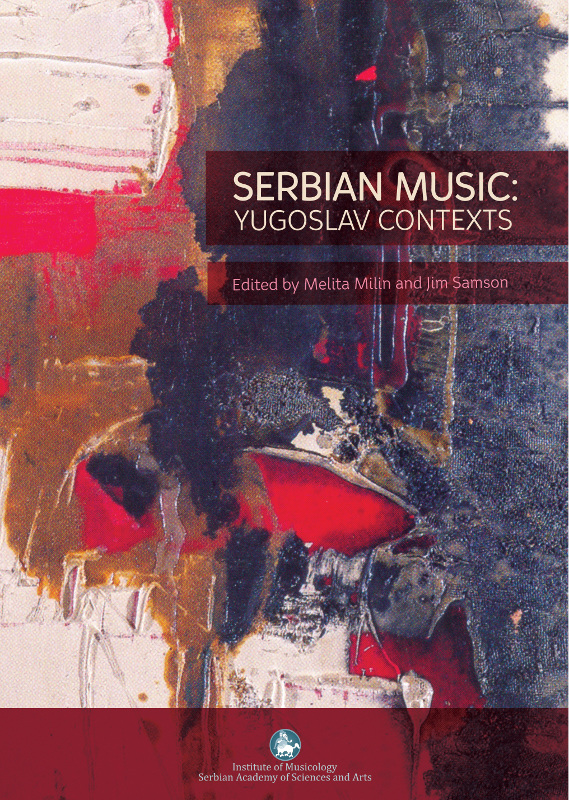 Posted at 09:25h in Uncategorized by Admin

In December 2014 a new book, SERBIAN MUSIC: YUGOSLAV CONTEXTS, has been published by our Institute! Its editors are Melita Milin and Jim Samson, author of the Introduction. In its nine chapters, Serbian and foreign scholars (from Greece, Slovenia and Portugal) discuss issues of Serbian music produced or consumed within various social contexts shaped by the idea of Yugoslavism.

Excerpt from the Preface by Melita Milin:

As its title suggests, the volume aims to throw light on different aspects of Serbian music (art and popular) composed and performed during the lifetime of the Yugoslav state (1918–1991). The Yugoslav multinational frame is considered by most of our authors as of essential importance for the shaping of Serbian music and musical life, as indeed it was for the music of all the other nations in Former Yugoslavia. What kind of continuity was established with the era that preceded the establishment of that complex state? How did the competing political programmes of the different nations influence the sphere of music? How was the official cultural policy of rapprochement among the different Yugoslav nations implemented in practice? How did the different nationalisms shape musical creativity in Yugoslavia? Is it possible to speak of Yugoslav music at all? What can musicological discourses tell us about self-representation among the different Yugoslav nations? And how were political tensions (communism v capitalism) reflected in popular music? These are some of the questions which the authors of this volume attempt to address.

This book is the first of its kind in English. Its aim is by no means to present a history of Serbian music from the last decades of the nineteenth century to the present, but rather to offer fresh insights into the complex, dynamic relationship between national continuities and state discontinuities in a country that has always viewed itself as part of European cultural space.